We Pull Up a Mash Tun with Doug Marchakitus, Head Brewer at Manayunk Brewery 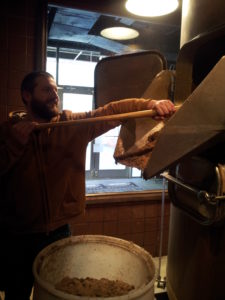 The longer you hang around the “good beer scene”, the more people you meet over and over again. You start noticing many of the same people at your favorite beer events and beer bars. And the brewers at your local brew pubs become much more than mere employees of the establishment. Soon they become friends who help you navigate your own beer brewing endeavors. Such is true with Doug Marchakitus. I first met Doug when he became the assistant brewer at Iron Hill North Wales. I’m almost positive I met him before that when he was a customer at Keystone Homebrew, but my first real interactions with him, i.e. me sidling up to him all the time, happened when he took the job with Iron Hill. As anyone who has spent even a passing minute with him will tell you, Doug is a nice and easy going guy. In my humble opinion, he typifies the good-beer industry. Always willing to talk to you (even if you’ve had one too many and aren’t making sense, my bad Doug) and happy to answer a question about his beer or yours. And while Doug has yet to take me up on my offer to have tea and scones together on Valentines Day in Central Park on a horse drawn carriage, he remains one of my favorite professional brewers, bar none.

I encountered Doug on a somewhat busy day. Manayunk was brewing that day, and they were prepping beers to send off to Belgium Comes to West Chester. Thankfully, he was able to pop a squat with me in their restaurant and answer some of my hard hitting questions.

Me: How long have you been brewing?

Doug: Professionally about 5 years. Including homebrewing, since 2002.

Me: What kind of brewing system do you have here? What’s the capacity?

Me: Has Manayunk ever told you that you couldn’t brew a certain beer you really wanted to brew?

Doug: I was told it wasn’t wise to brew certain kinds of beer, not that I’ve always listened to that. You know how I feel about smoked beers and that Smoked Porter (what I was drinking during the interview) is a good example.

Me: Are there any styles of beer that you just flat out do not enjoy?

Doug: Not particularly. Maybe Milk Stout. Not that I dislike the style, there’s just many stouts I prefer to drink over Milk Stout. I don’t like overly sweet flavors. Even though Mackeson’s was one of the first stouts that I enjoyed, I think my tastes have really changed since then.

Me: Have you ever lost a batch here at Manayunk? Ever had to dump a batch?

Doug: No, at home yeah. But not here.

Me: Most homebrewers dream of opening their own brewery. What’s a logical first step to get into the industry?

Doug: I did it by serving at Iron Hill. Brewing jobs are like any other field. If you don’t have any experience they’re hard to get in there. But there’s many jobs that have to do with beer that aren’t necessarily brewing like serving at a brewpub is one. Or bartending or working at a beer distributor. It’s easy to get into the beer community not as a brewer.

Me: Get as close to the industry as you can and then work your way to where you want to go.

Doug: Exactly. Jobs open up rarely, but when they do, it’s usually a person conveniently available is gonna get it. I guess trying to be that person.

Me: You share my love of smoked beers, as we’ve touched on. Manayunk is the only brew pub I know of that regularly has one on. Is that your love of the style? Or are you converting Schuylkill Punch drinkers?

Doug: That’s purely personal preference. Which you can say about a lot of the beers. I’m a very selfish brewer {laughing}. I understand there are beers that sell really well. You call something an IPA and it’s going to sell out really quick. But if there’s a beer I want to brew and I want to drink then I will try my best to convince people to drink it but really it’s for myself.

Me: What advice would you give to a homebrew who comes up to you and says “my beers just aren’t as good as the beers I can buy”?

Doug: I would say just keep trying. Number one is sanitation. Keep everything clean. I believe there’s good recipes and not so good recipes. Use good malt, hops, and yeast and it’s going to come out good. Maybe not exactly what you want. But it’s small adjustments from there. Keep the recipe simple. You don’t have to have 12 different malts in a beer for it to be good. Some of my favorite beers are just Pilsner malt or just Munich malt.

Me: Manayunk has had some well known brewers pass through its doors. Did you feel any pressure to raise the bar when you took over?

Doug: Manayunk is an interesting case because a lot of times when the place changes head brewers either one of two things happens. Either the beer becomes completely different because of that brewer’s vision or nothing happens because the new brewer is just going through the motions making the same beers. I’ve kind of built on every brewer that’s come through here. We’re kind of an evolving brewery, and hopefully that evolving means the beers as well.

Me: I learned recently that Manayunk is phasing out its lagers. Why?

Doug: Demand, and once again my selfish temptation to have more Belgian style beers on. Just the lager beers have never really been a focus of ours. Having the lager yeast around, taking longer to ferment, tying up tank space. Since we’re selling a lot more beer, it made sense for us to focus on ales and Belgian style ales. Not that we’re going to stop brewing lagers. We are going to do an Oktoberfest and a Pilsner. You’re going to see lagers, just not a year-round basis.

I take a mighty sip of my delicious Smoked Porter and tell Doug the hard part is over. No more lengthy questions. I tell him that I want to do a word association quiz with him. He sees I do not have any ink blots or the like, so I break it down for him. I’m going to say a word, and he just needs to say the first word that pops into his head. Easy right?

Me: Flood
Doug: Oh Darn (seriously, no swear words were used. Although he elaborated later he wanted to)

Me: Habanero (If you’ve never had the pleasure of Doug’s Habanero Porter, beg him to brew it again)
Doug: Porter